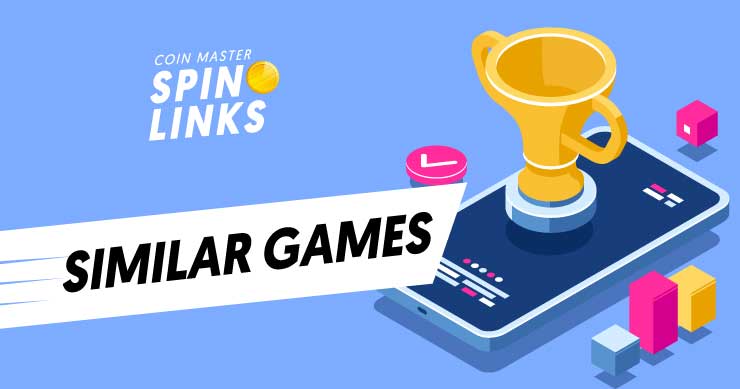 Looking for similar games like Coin Master and Pirate Kings? Well, then you are exactly in the right place! Here you will find some exciting games like coin master to play online this year.

Coin Master & Pirate Kings are two of the exciting games currently looting the ratings & registering many achievements in their account.

The ultimate objective of the game is to crush your opponents by conquering their islands, loot treasures, collect gold & build your kingdom. There are different kinds of weapons that can be used in this game to bring down your foes.

The similarities between Coin Master & Rich Pirates are quite in a big number. Players can raid other islands & collect gold. A player has to defend his kingdom as well as conquer others to become stronger & richer just like in Coin Master. Rich Pirates also have a feature like coin master free spins, from which a player can win exciting rewards.

Piggy Boom hails from casual category in gaming. It is an android game developed by Aladin Interactive. It has nearly 1 million reviews on the Google Play Store.

Piggy Go is added to this list because of its gameplay where a player has to roll a dice, travel around the world with different players,  and raid cities, collect gold & win jackpots!

Initially, a player has to join a fierce competition where he has to collect tickets. Then he can go on starting his adventures in different places like Casino to collect as many rewards as he wants. Players can also make a delicious meal for himself in the kitchen of the game.

Boom Space is one of the exciting games like Coin Master. It falls in the adventure, social & multiplayer category of the games. The game is equipped with many features that mirror as same as of the Coin Master & Pirate Kings.

Instead of the Slot Machine of Coin Master, this game has a magic wheel from where a player gets to collect great rewards like gold & more. A village is the base of every player which he needs to build by looting other villages collecting rewards & other bonuses in order to proceed ahead in the game.

To stay in the game, a player has to defend attacks on his village from other players. In such regards, the game provides an opportunity to collect some cute adorable pets as well which will help you to defend your cities against invaders.

While playing the game, players can also enjoy chatting with their friends. In order to become a master, one has to expand his village.

This is why Boom Space is on the recommended list if you are looking for games like coin master.

Gardenscapes is developed by Playrix & available for android devices at the moment. It’s free to download & users can download it easily from the Google Play Store.

The storyline of the game start from a garden that is related to too many characters that you’ll find in the game. The game is set with unexpected twists & turnarounds.

A player has to build the garden & restore its former glory in order to proceed & eventually bring the game to the end. You can play it with your friends just like you play Coin Master or Pirate Kings. There is an adorable puppy in the game which you’ll love to interact with!

The game is rated one of the best games on the Google Play Store with having nearly 8 million downloads & reviews of the same number. Most Reviews left by the users have also been positive.

Each of these animals has their own home where they invite the player to play many games & participate in different activities.

The game can be a perfect learning & educational tool for your kids as it let them navigate through astonishing universe & interact with a great number of things.

Every day is equipped with new games to play. A player is handed over a few tasks like lighting a fire, decorating the Christmas tree & cook some delicious dishes for buddies.There are a lot of rewards like golds, diamonds & much more await you!

These were the best games to play online if you want a similar exciting experience from the Coin Master and Pirate Kings.

Have fun and leave a comment below with your favorite games like coin master and pirate kings.